Coming from Hong Kong island, we left early in the morning as the commute was roughly 2.5 hours and included travelling on the MTR (Hong Kong Train service) to Lantau Island. From Lantau Island we hopped on a bus for the rest of the way.

On arrival, we were greeted with plenty of companies offering to take us out on a boat river tour of Tai O village. For only 30HKD we took a ride through Tai O and admired the countless stilt houses and shops lining the river.  Included in the boat ride is a trip deeper water into the ocean where they say you can spot the pink dolphin, common to the area.

We spent some time ambling through the Tai O village. Tai O village is packed with merchants selling dried seafood goods, live fish and smaller souvenirs. We stopped in at the Triple Lanterns Café for a cool drink and a snack.

Walking across Tai Chung bridge gave us a beautiful view of the bustling village with peaceful mountains in the background. The bridge leads you onto a path that connects you with the promenade and pier at the end. We ended the day with lunch at the Heritage Hotel, formerly the Tai O Police Station and one of the earliest police stations built in the New Territories. 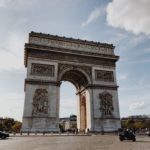 Back to top
wpDiscuz
1
0
Would love your thoughts, please comment.x
()
x
| Reply